Feijoas, Kay’s pout and a prize

‘What,’ I emailed my youngest sister several years ago, ‘is this? I’ve never seen anything like it before. It smells edible but I’m not game to taste it.’
I sent her a picture, like this. This was in the days before Wikipedia was the world’s oracle, though nowadays there’s a good description of this exotic fruit in several places, including here.
She rang back immediately.
‘It’s a feijoa. You have them in your back yard? You’re lucky. Jessa loves them.’
Looking at the picture now, its relationship to the guavas that grew everywhere when we were kids is as plain as the nose on your face, as was the guava/pineapple/fig fragrance that I had noticed when I first cut one in two. Amazing that I had never come across them before.
Are you sure they won’t give me a permanent pout?’
‘Pardon?’ she queried.
‘They ARE related to the guava, you said.’
I paused, knowing that Kay was very quick on the uptake.
‘Ohhh! I get it.’ She laughed. ‘I think you're safe from the pout.’
When Kay was little, and things didn’t quite go her way, she had a very well developed ability to pout.
‘If you do that too often,’ my mother warned her on more than occasion, ‘your bottom lip will stay out. It just won’t go back.’
‘Poo!’ said Kay, and continued to pout as long and as often as she felt it was warranted. That end point was usually when she got her way.
On her Saturday afternoon round of the fruit trees, when she was about six I guess, she saw that there were new guavas on the tree near the hay-shed. She climbed the tree, as guava trees are fun to climb when you’re six, with nice smooth limbs and easy hand and footholds.
The guavas were a bit green, but she sat up in the tree and ate one. Or two. Or three.
Next morning, she was shocked to discover that her bottom lip was sticking out like her best-ever pout.
‘Mum!’ she came rushing into the kitchen just before milking, ‘I won’t ever pout again, I promise. But fix it - please?’
‘You’ve got an allergy,’ Mum said, both concerned and amused. ‘What did you eat yesterday that was different? Wash your face and read for a while, and when I get back from milking, maybe the swelling will be gone. I’ll put some cream on it.’
Face cream was a panacea for all minor conditions such as this where the diagnosis was uncertain.
The lip resumed normal service through the Sunday morning but Kay was very wary about pouting ever again.
So, that was why Kay and I were having a bit of a chuckle talking about the feijoas.
Kay went on to become a much-loved teacher, married her beloved Johnny Gee, and produced two beautiful daughters, Julia and Jessamy. She was a great gardener, and went on to do a horticultural degree at Swinburne. Not only did she do it, she was one of their finest students, and received their top honours at graduation.
She, with John’s help, established the premier Australian site for gardening on the web, which resulted in her being a much sought after judge of all sorts of horticultural competitions around the country. She received national awards and high honours for her distinguished service to Australian horticulture.
And that’s what I’m coming to here.
Kay was cruelly struck down by breast cancer in 2008. When the condition was diagnosed, Johnny and she did everything that was possible to confront the attack on Kay by this cursed scourge of our society.
It is one of those terrible ironies that life throws at us that Kay was one of the least likely persons, anyone would have thought, to fall victim to cancer, given her outlook and lifestyle. Life has never been ‘fair’ in terms of all humanity, but that is a characteristic of life itself, in both the negative and positive senses.
In memory of Kay, and with great regard for her professional accomplishments, the Horticultural Media Association of Victoria set up an award in her name. It’s exactly the sort of award Kay would have wanted to give, because a student in any horticultural discipline can win it.
The conditions for winning the $500 prize (or other prizes) and the kudos that go with them are set out below. If you know of anyone who might like to enter, they’ve got adequate though limited time to submit an entry.
===================== 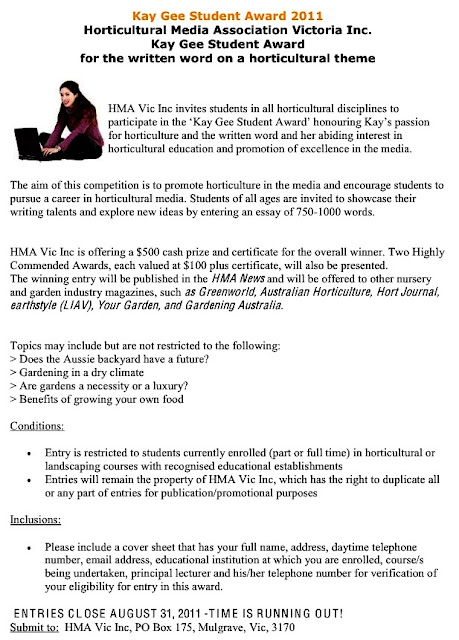 ======================
Text of the above award:
Kay Gee Student Award 2011
Horticultural Media Association Victoria Inc.
Kay Gee Student Award for the written word on a horticultural theme
HMA Vic Inc invites students in all horticultural disciplines to participate in the ‘Kay Gee Student Award’ honouring Kay’s passion for horticulture and the written word and her abiding interest in horticultural education and promotion of excellence in the media.
The aim of this competition is to promote horticulture in the media and encourage students to pursue a career in horticultural media. Students of all ages are invited to showcase their writing talents and explore new ideas by entering an essay of 750-1000 words.
HMA Vic Inc is offering a $500 cash prize and certificate for the overall winner. Two Highly Commended Awards, each valued at $100 plus certificate, will also be presented. The winning entry will be published in the HMA News and will be offered to other nursery and garden industry magazines, such as Greenworld, Australian Horticulture, Hort Journal, earthstyle (LIAV), Your Garden, and Gardening Australia.
Topics may include but are not restricted to the following:
> Does the Aussie backyard have a future?
> Gardening in a dry climate
> Are gardens a necessity or a luxury?
> Benefits of growing your own food
Conditions:
·                  Entry is restricted to students currently enrolled (part or full time) in horticultural or landscaping courses with recognised educational establishments
·                  Entries will remain the property of HMA Vic Inc, which has the right to duplicate all or any part of entries for publication/promotional purposes
Inclusions:
·                  Please include a cover sheet that has your full name, address, daytime telephone number, email address, educational institution at which you are enrolled, course/s being undertaken, principal lecturer and his/her telephone number for verification of your eligibility for entry in this award.
ENTRIES CLOSE AUGUST 31, 2011 -TIME IS RUNNING OUT!
Submit to: HMA Vic Inc, PO Box 175, Mulgrave, Vic, 3170
Posted by Denis Wright at 10:07 AM