On Jay Rosen and wicked problems

These days, I do a lot more listening than talking.

For years, in my petty kingdom of several lecture and tutorial rooms, I was the talker. Some even thought I was a guru, which isn't as much fun as it sounds. I wasn't.

It's exactly five years since I gave all that away, when I took the sensible decision to retire from my university post and do other things. Luckily, I had more than two years as a free agent, before having this vast change of life with an illness I'm glad I never saw coming. I didn't really know those two years of filming and playing with graphic design were going to be the years of transition, but they were.

When I say I'm listening, I mean reading. I now read all sorts of things I would never have allowed myself the time for in my former existence. It's not really a matter of choice, but there it is. I couldn't imagine, when I filmed that last musical, it would be the last time I'd ever touch the controls on the big video cam.

So I read. Articles in the news, opinion pieces, blogs, novels and texts from Gutenberg; anything that takes my fancy. I'm a student again, but with the advantage of a few decades under my belt. I've had the training through academia to cope with long articles of up to 10,000 words at a sitting, if they hold my interest, though like most people I tend now to be looking for the shorter, zingier piece. 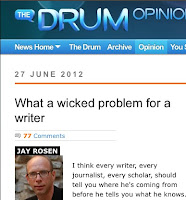 I came across this article by Jay Rosen. It's nearly 3000 words, so it's a fair chunk. "What a wicked problem for a writer" it's called, tantalisingly. This guy sure knows how to write a teaser headline.

It's a fascinating piece. Well, it is to me. I wondered if I could summarise enough of it to make sense, and maybe get you to read it.

"If you don't know the solution, then you don't understand the problem."

That seems too glib, but he's right. He talks of problems that are easy to understand ("tame" ones), even though the solution may be complex. They are not his subject here. What he's interested in are what he calls "wicked" problems, which are so complex to start with that there's really no solution. The world is full of them, and the way we go about dealing with them is up to putty.

We call in the experts, but experts only see the problem through their window. Maybe they can solve part of the problem, but in doing so either ignore or don't grasp the critical nature of the rest of it. Thus we send in bureaucrats from Canberra to solve problems of Aboriginal health in the Northern Territory. They are very good at what they do, but the problem is too complex for any "solution" they come up with.

We look for solutions to boats filled with people appearing on the northern Australian horizon. "Send out the Navy and sink a few," is one bright idea. "You'll stop 'em pretty damn quick then."

Problem solved. Rubbish! As Kimberley Ramplin pointed out in various Twitter postings, and I have also written about, these few people are part of a gigantic global problem that has no easy solutions, let alone criminally insane ones. But I won't get bogged down with examples of what Rosen calls "wicked" problems like these.

When Robert Pirsig wrote Zen and the Art of Motorcycle Maintenance, his main character had suffered a total mental collapse, because of his failure to come to terms with Rosen's "wicked" problems. Written in 1974, Zen and the Art can still hold its ground as an enlightening philosophical essay, despite things I find irritating about the book now I return to it after thirty years. It's an example of another window on Rosen's subject, but Pirsig really only gets as far as defining the problem.

Rosen attempts to grapple with it. The experts are useless in dealing with "wicked" problems, he says, because they only make things worse. So what's the alternative?

We live in an age where thousands or more of people can put their view, all in the one place, or a limited number of places. It's possible to study these views, and seek out an approach based on consensus. (Stick with me now; here's where you need to go to the article to see where this is heading. I'm determined to finish this in fewer than 999 words.)

He doesn't mean those forums so beloved of politicians where you get a hundred experts together, or even a hundred honest citizens. They're just token pow-wows designed to give the impression that somebody is doing something about something and nothing really gets done.

No. He's talking about real consensus, or as wide a consensus as possible, because the input of millions of people linked closely to other millions of people means something dynamic. It's like some tribal customs where, on a "wicked" matter, the members of the tribe (OK, probably the elders, probably all male) sit down and thrash it out, even if it takes hours or days of debate and discussion until everyone accepts that a decision to be taken is the best one possible, imperfect though it may be.

Only then can the tribe work together towards a solution. It's the "together" bit that matters, because only with an agreed base on collective knowledge and experience a "wicked" problem can be tackled. Leave the experts to sort out what Rosen calls the "tame" problems, like landing humans on Mars or using sharp instruments on your brain.

I know. What I've said raises more questions than answers. Those with access to today's global "forums" are limited in vital ways, but vastly increased on what they were even a century ago. And consensus is alien to our form of "democracy".

Of course, I don't have the solution. I guess, as Rosen says, I don't understand the problem. QED. So help me!