Sea, mountains, and a painting 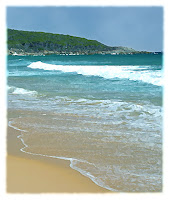 Some bright spark once said, "There are two types of people: those who make lists, and those who don't."
I think there are two types of people: those born or have lived a long time within sight, sound and smell of the sea, and those who have not.
I have always been a sea person. I was born in a hospital on a hill within sight of the ocean, and the sea was never far away. In my first days of life in the afternoon sou'easters on the hospital's verandah, I would have absorbed the salt-laden air and integrated the ocean with my being.

This created my world of three elements – sea, land, and sky. Sea to the east, land in the western half of consciousness and the dome of sky above. Yin and yang, you might say; and, well... Jung. A new day began with the sun climbing out of the ocean, and it ended lost in the trees to the west.
The sea always represented a psychological "out". I can't describe it any other way. It was limitless. Beyond the waves breaking on the sand, it stretched infinitely to the east until it met the sky in a perfectly straight line separating two differing blues. I don't know the painter's name for the right shades but everyone knows those colours. One surely must be Greek Blue.

In my late teens, I used to paint pictures of that sea and sky; sand in front, breakers on a shoreline bordered by cliffs. They were always pretty much the same, on the grounds that you can't easily improve on perfection. The cliffs shouldn't have been there but I liked painting cliffs, so they occupied the same spot in nearly every painting, to the north and south of the ocean - a body of water which should probably have been either the Mediterranean Sea or the English Channel. Don't ask.
I put what I believed to be the best of these paintings on the lounge-room wall in my mother's house overlooking the harbour.

The one thing it had in common with all the others of the same genre was that it was awful. How pained my artist mother must have been to endure its awfulness, particularly when she and all my sisters were much better at painting than I. Or when guests came and maybe thought the painting was one of her efforts. But no way would she hurt my feelings and take it down while I was living under her roof.
Perhaps she should have put a sign under it:

THIS WAS PAINTED BY DENIS
I wouldn't have minded at the time. I would have taken it as a seal of approval, i.e., appropriate acknowledgment of a son's talents by a proud mother whose paintings graced many a wall round the country.
My surf-and-sea painting did disappear without trace a few months later when I left to go to Brisbane for full-time university study. I never saw it again, nor any of the other monstrosities of its ilk, and I'm eternally grateful for the fact that they all must have gone to a good home at the garbage tip within 24 hours of the Datsun 1000 and the budding artist hitting the road for Brizzie.
But I've strayed where I never intended. Back to the point.
Although I have never lost this yearning for the sea, I've lived the longer part of my life away from the coast, up here on the New England plateau.  What I noticed most keenly when I first came here was that hills surrounded me completely. The eastern segment of my elemental triangle was gone. Sometimes I felt a kind of suffocation by this loss.
At least in places like Armidale, we can drive off the edge of the high country to the east and be at the seaside in two hours. Psychologically, that's as close to home as I feel, though I've got used to the Tableland now and couldn't bear the humidity of long summers by the sea.
These musings were brought back with great vividness to me by the "...violet-haired, pure, honey-smiling Sappho", whose poetry from 2700 years ago has an unmatched beauty and richness. The coastal dwellers, those who tread the white sands of the Australian beaches, will appreciate this more than anyone else:

Lo, where the white-maned horses of the surge,
Plunging in thunderous onset to the shore,
Trample and break and charge along the sand! 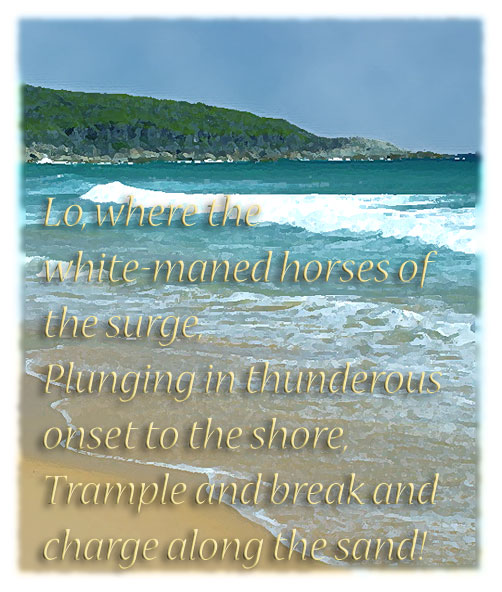