My mother, even when quite elderly, was not averse to writing a humorous poem or two in her own whimsical style. My sister Lyn sent this to me when she read my little story on the race between Dad and Carolyn Young; it complements it in a way. This poem was written in a lightning creative contest in poetry at the Library of the Retirement Village where my mother lived and acted as Librarian, and would have been composed when she was 88 or so. The poem had to describe an event from an earlier part of one's life - this one would have been in the early 1940s.


By word of explanation, one of the competitions for women described in the poem was a 'throwing the broom' contest to see which woman could hurl it furthest. If you find the writing a little difficult, a typed version is below the original. 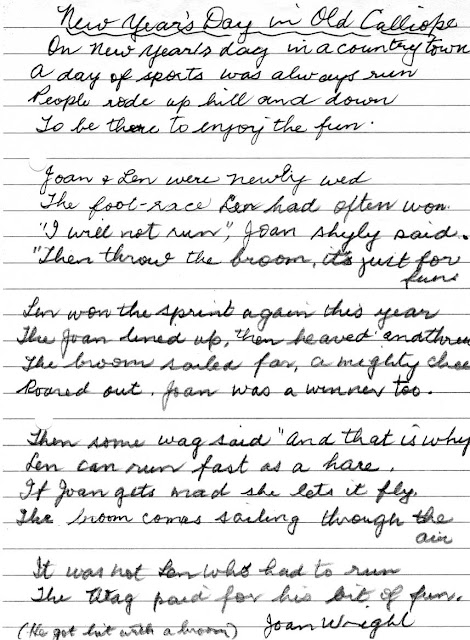 New Year’s Day in Old Calliope
On New Year’s Day in a country town
A day of sports was always run
People rode up hill and down
To be there to enjoy the fun.
Joan and Len were newly wed
The foot-race Len had often won
‘I will not run,’ Joan shyly said.
‘Then throw the broom; it’s just for fun.'
Len won the sprint again this year
Then Joan lined up, then heaved and threw
The broom sailed far, a mighty cheer
Roared out. Joan was a winner too.
Then some wag said, ‘And that is why
Len can run as fast as a hare.
If Joan gets mad she lets it fly
The broom comes sailing through the air.'
It was not Len who had to run –
The wag paid for his bit of fun.
(He got hit with a broom)
Joan Wright
Some say I got my sense of humour from her, but that can't be so as she had hers right to the very end! 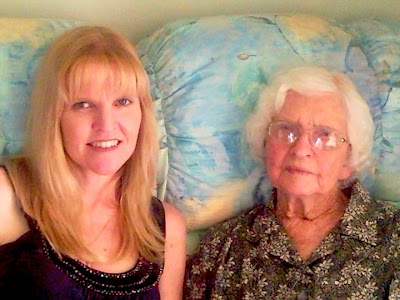 My mother would have looked just like this when she wrote the poem. 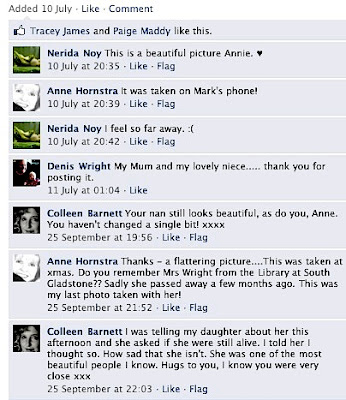