Of all of the delights that occurred surely and sweetly at the years end when we were growing up, Christmas had to be at the top of the list. As school finished with its day of days, the one and only Breaking Up Day, preceded by The Fancy Dress Ball in September, the summer school break rolled seemingly endlessly before us and the anticipation of Christmas was at long last with us, each day edging us closer with maddening slowness. It was summertime, no school to think of, just days of delight down at the creek or going to town to spend our saved little bits of money on a Christmas present for each member of the family.
This was usually accomplished in just one or two visits to Gladstone to trawl through Woolworths and Penny's and Friends store with its various departments, bare board floor, and large shiny topped counter where an assistant took your money, wrote out a docket and placed it all in the little cup she unscrewed from the flying fox and then sent it zinging up to the office in a mezzanine area above. Your change was duly returned by the same method as the assistant wrapped your purchase in brown paper and sealed it with a good length of durex tape. The larger department stores had this arrangement, but Woolworths and Penny's had an array of assistants who served on a particular counter and put the sale through a cash register. These shopping trips and keeping the items bought a secret from their intended recipient, was guaranteed to get the excitement mounting and the anticipation increased daily as Christmas Eve approached. Each year we had the certainty of this lead up to the long awaited day.
Christmas cards arrived by mail and presents from the relatives in Brisbane, and Dad purchased his annual dozen or so bottles of beer and two dozen mixed softdrinks from Wards factory. We felt as if we were living in the lap of luxury. The copper was cleaned out ready for the cooking of a leg of ham and the hens in the fowl house were eyed speculatively to see which one might be sacrificed for our Christmas dinner. Our sympathies for the poor old chook didn't last all that long as the thought of it stuffed and roasted with its accompanying potatoes, pumpkin and sweet potatoes, was a once a year meal that overrode all.
At last it was Christmas Eve. Jan and I had blocked our ears so that we didn't hear the axe fall on the poor chook's neck and had helped with the plucking and eyed warily the cleaning out of the innards, but once the bird was stuffed and trussed and ready in the fridge for our Christmas dinner, all was satisfactory. On the verandah in the late evening, we convinced ourselves that we could hear sleigh bells and choosing a pillow case for our Santa sack to go at the end of the bed, we headed off to bed much too excited to sleep.
I don't know quite how we managed it, but each child woke separately on Christmas morning and heaved his bulging bag of presents into our parents bedroom and one by one, each opened their parcels right down to the nuts and sweets and santa soap that was always at the bottom of the bag. Happy chaos reigned and Dad left it until much later than usual to go for the cows, but they had to be milked so all was put aside temporarily until after milking. Then it was a bacon and egg breakfast and off to church for us children to sing Christmas carols with gusto. We were expecting Aunty Lucy and Uncle Frank to share Christmas dinner (lunch, these days) with us and then in the afternoon we would all drive out to Aunty Daisy's and Uncle Siv's place at Taragoola, a distance of about twelve miles.
Christmas Dinner lived up to all expectations and the roast chook and ham and roast vegies was followed by a steaming plum pudding just out of the big pot on the wood stove where it had been simmering for a couple of hours. Tucked within it were threepences and sixpences, which one had to suck all the surrounding pudding and custard off, and put carefully away. Nothing was wasted and nothing was left except for the ham which was to provide us with cold lunches through until New Year and perhaps the heel of the pudding which was eagerly dispatched the following day.
Mum and Dad milked the cows a little early and we piled into the car for the trip to Taragoola over a dusty dirt road, but we didn't mind because going out there was a special event and much looked forward to. About two thirds of the way there we kept a keen eye out for what we always referred to as Aunty Daisy's mountains - our first view of the little mountain range on the other side of the Boyne River where the farm was and the first sight of the mauvy blue peaks was always eagerly awaited. The spot was special in many ways - for the beauty of its setting, the farm on the banks of the Boyne River with those mountains close by, and for the good natured, loving Aunt and Uncle who welcomed us with delight on every visit.
Various other relatives - cousins, brothers and sisters-in-law, nieces and nephews would often be there or arrive after we did and all seemed to be under the spell of the peace and beauty and good cheer of Riversleigh, as the farm was called. We all trooped down to the dairy at milking time and although our own milking machines were similar, Uncle Siv had a bright green Jacko Steam boiler which sat in the dairy and hissed and steamed and which we kids always gave a wide berth on walking round it.


We helped feed the calves and watched in delight as Uncle Siv held a handful of ticks he had picked off the cows and a kookaburra came and ate them from his hand. Our cousins, Mervyn and Neville whistled cheerily all through the milking and cleaning up and there was always good natured teasing going on. The atmosphere was unique - contented cows, quiet order of the work routine, the river gums lining the river against its mountain backdrop, and the rich black soil flats green with lucerne. Work over, we returned to Aunty Daisy's house where the ladies were busy preparing an evening meal for a lot of people.
The long summer afternoon also had its own ritual. The men were outside with their glass of beer and stories to tell, the women cheerfully chattered as they prepared the food and we kids explored going down to the crossing where the River was shallow and ran swiftly over the riverstones, having been warned to be extra careful and not to go into the shallow water. We always did go in the very shallowest part, but the rocks were slippery and we were careful. We had a healthy respect for such a large body of water. It was nothing like our little creek at home, much, much larger, and we knew and understood the power of it. We didn't stay long down there and as the sun dipped down we were called to come to the evening meal.
Aunty Daisy's table was a very large one. Somehow with an assortment of chairs, we all fitted around it and the beautiful big pressure lamp was lit, the mantle shedding a white light that was so powerful it almost hurt the eyes and made the forty watt electric light seem very weak in comparison. It was a merry table. Uncle Siv told his same old jokes that we laughed at every year, and we giggled when he addressed the family members whose names all began with J, as June, Joan, Jan or Jan, June Joan and if the neighbours were visiting, Jean was also included. We had a great respect for Uncle Siv. He joined the army to fight in the first world war by lying about his age and was only sixteen years when he was sent off to France to survive the ghastly battles fought there and which affected his health thereafter. He always had some stories to tell and we always waited to hear them, we children not really understanding it all. But it was part of him and we learned more as we grew up.
Aunty Daisy was one of those much loved women who worked long and hard but was never cross and her laughter which sounded just like the water over the riverstones at the crossing, was always ready to bubble up. I'm sure that sense of humour was her saviour over long hard years. It made her loved by all, particularly we children. She always found time to search out things for us to do or dig in some long forgotten box for books for us to read. Once, she found for me the story of the Nutcracker which I devoured with great relish, though having some nasty dreams at night of the the fearsome Mouse King and his armies and the poor old Nutcracker. Some of the pages were missing and the cover was gone, but I still loved it.
Her garden was special, too. It was not very good soil there, thin and silty, but Aunty Daisy coaxed roses and gerberas and coelous to grow though they struggled a bit depending on the season.
So as it was quite dark, and Bill and Jean Long's house light across the Boyne shone brightly from their house at the base of the mountain, and all good country folk don't stay up terribly late, we piled back into the car and headed home. It had been the expected wonderful Christmas Day to store and savour in later years with those other childhood reflections, so absolutely of the era, and to each of us, part of who we became. 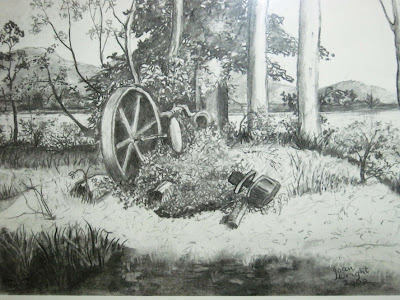