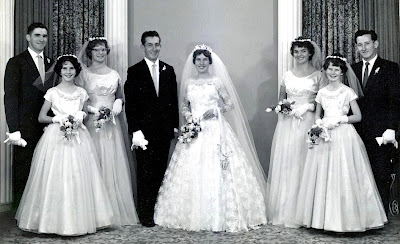 This photo is of the wedding of my sister Jan to Ken Stockwell. I referred to them after marriage in another story, and Jan wrote on her impressions of Christmas at Taragoola, as did Lyn, who’s the senior bridesmaid on the left. I’ll have more to write about Ken later, as he made a great impact on our lives. But I’m using this photo to tell a story about my youngest sister, Kay, who is the sweet little junior bridesmaid on the right in this picture.
Kay fancied herself as a bit of a singer when she was about 5 or so, and would perform without much persuasion for family and visitors. This was usually downstairs, under our house in the cool of the afternoon and after milking was over. It was a great time when we could all relax.
On this particular afternoon, Kay had an audience of Aunty Lucy, Uncle Frank, and our cousins, Beth and Gay Brown, apart from Mum and Dad and us siblings and one or two others. Gay is the other junior bridesmaid in the wedding photo. 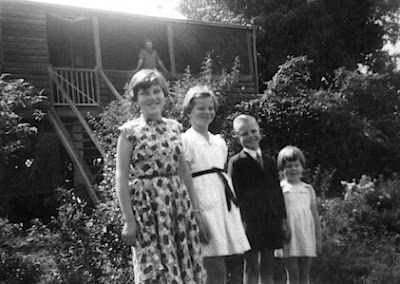 
http://www.youtube.com/watch?v=tf-3v2W_9Yc
The only problem for Kay was that there was a fair chance she would get it confused toward the end.  If you watch this screamer of a version of it on youtube – hang in there till the end, the visual alone is worth it - you’ll see how fraught with danger this is for a 5 year old whose confidence might just have outstripped by a fraction her memory of how the song ended. Kay, let me add, was excellent at many things later in life, such as writing, painting, and a nationally known horticulturalist, but singing was one of her lesser talents, let’s say.
So, the concert began, and sadly, towards what should have been the end, Kay found herself going into an infinite chorus loop, forgetting where the stopping point was. After a while, the inevitable happened. Beth Brown, sitting down at the back, started to giggle. Beth would have been about 10 at the time.
Kay was having none of that. She glowered furiously at Beth, and continued with the song, but unfortunately was still in the infinite loop. Everyone tried to contain themselves, all except Uncle Frank who was chortling like crazy, sitting on an end seat down the centre aisle of the performance area. Meanwhile, Bethy Brown down at the back continued to giggle – very quietly, it must be said, but visibly. And Kay had a keen eye open for any critics of her performance. Like Churchill and trailing prepositions, it was something up with which she would not put.
Kay was now deeply offended by this discourtesy, her fury directed particularly at Beth, whom she regarded as the originator of the barely repressed chortling and the indignity she was suffering. She stopped her song, and marched down the centre aisle, heading for Beth, who she was going to teach a lesson in manners.
On the way down, as she walked past the grinning Uncle Frank, she clipped his ear good and hard, much to the amusement of Aunty Lucy – and of Uncle Frank, who I thought was going to fall off his seat with laughter. Fortunately for him, he was not the main target, just someone who was in a great position to be disciplined on the way. Beth, still giggling like mad and seeing Kay bearing down upon her not unlike the train in Rock Island Line, jumped out of her seat and took off to parts unknown, at least by Kay, thus saving herself from near certain strangulation by the prima donna. Or worse, the Kay Death Stare, followed by immediate throttling.
The performance thus came to an abrupt conclusion with the singer refusing to perform for an audience not appreciating her talents sufficiently, and it was only several of Aunty Lucy’s fairy cakes that changed Kay from a seething, simmering five year old bearing a very large chip on her shoulder back to her usual angelic self. Beth did not return for quite some time after – until she was sure it was safe to do so.
But if you were in the audience that day you would never forget the sight of Kay explaining to the audience in no uncertain terms as she swept down the centre aisle what was expected of them as to their behaviour whenever she was performing for them. By the way, she loved Uncle Frank dearly and was always his favourite – but he was not hers on that day!


FOOTNOTE TO THIS STORY: When she read this incident, my sister Lyn reminded me of something I had completely forgotten about. In her words:


"I was amused at the piece on Kay getting stuck on the Rock Island Line song, but you didn't use the punch line?....  I won't forget the glitter in those eyes as she stalked off muttering 'that bloody Beth Brown'!"


I wish I'd remembered that before I published the story! Thanks, Lyn!
[Next story] |  [Back to Index]