Some encouraging news - thanks, Avastin

...and thanks to those who made it possible!


Tracey and I have just returned from an MRI scan in Tamworth. We have had a look at the scans and we feel happy with what we are seeing. Let us share a comparison with you.


Here is a scan that was taken just before the first dose of Avastin, when things were getting very bad in terms of seizures and serious loss of mobility. 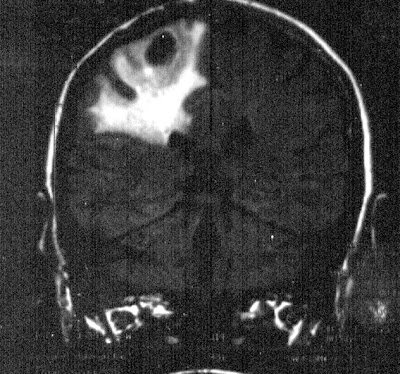 View looking down on skull, eyes at the bottom of the picture [August 2010]
What you see in the white area, [the black hole in the middle looking like an egg yolk] is a sac of dead tissue, probably the effect of blasting the tumour with radiotherapy. This isn't bad - it's what should happen. The doughnut shaped grey ring round and close to the black necrotic sac is the tumour [inside the white area], which had spread quite a bit in spite of chemotherapy and the radiotherapy in Melbourne.
The really white area spreading away from the tumour is inflammation, which creates the same problem as if it were tumour, especially in terms of brain pressure and trigger for seizures. Please understand that this image is only one slice of the brain and does not show the vertical extent of the inflammation.
Now, look at this image, taken today. 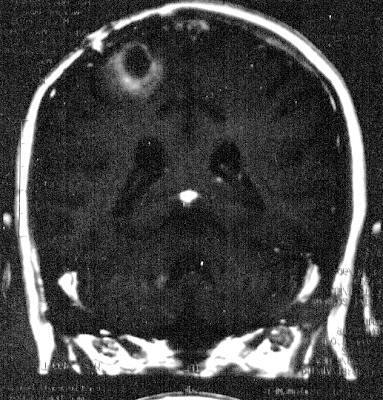 The size of the necrotic sac remains the same, which we expected as there's no way current treatment will alter that. But the tumour itself and the inflammation are very much reduced. This certainly explains the pause in seizure activity practically from the day of the first dose of Avastin to the present.


Again, this is not a cure and is not going to make the tumour go away. We also realise that the current efficacy of the Avastin will not last indefinitely. However, it is doing what we had hoped it would - giving me time that I would otherwise not have had, and making a significant improvement to our day-to-day lives.


I will, of course, do all in my power to boost its effectiveness with natural anti-angiogenesis foods, and while there is no seizure activity, do as much rewiring as possible of other parts of my brain through physiotherapy to restore movement and co-ordination in my right hand, arm and leg.


Such results can only encourage us to fight on with everything we have!
Posted by Denis Wright at 6:44 PM