A duckling, poddy calves, and freedom 1

home | WHAT'S NEW! | stories from my past
pt 1 <<you are here | pt 2
When I woke this morning, my brain was on fire.
I don't mean in a bad way; I meant that ideas were flowing through, separate thoughts and memories that get joined in the way a flame connects separate pieces of wood burning in the glass-fronted heater.
One memory was about a baby wild duck that we found on the dam when the girls were little. It was small enough to be rescued without protest.

One of its feet was malformed - not a lot, but a couple of toes were missing and the webbing incomplete. Perhaps the mother and brood had abandoned it on that account, or it may have been the sole survivor of a fox attack; its inability to keep up saving its life.

We took it up to the house and put it in a spare cage I had built for rearing chickens.

I think we raised it on normal chicken feed. It's a bit hazy now, but I moved the cage across the grass daily so it was able to forage, digging out little bits for itself of grass, insects... whatever its instinct told it was food for ducklings.  Maybe the girls found treats for it now and again.

I always think of it as female by the colouring, but I can't be sure. I'm not a duck-sexer and it didn't matter anyway. The girls fussed over her and she didn't mind, but she always had a natural wildness about her. 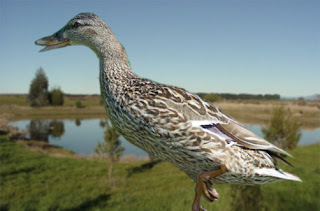 In a few weeks, her body grew to maturity. She always walked with a limp, but it didn't bother her much. Through the mesh clipped over the cage, she started looking upwards, exercising her wings. For a day or two, this scouring of the sky, the restlessness and wing-stretching went on.

We had never intended to keep her as a pet, so one morning, as the beating of wings started, I took the wire netting off the top of the cage, and we watched.

She stretched her legs and stood tall for a moment on the one good foot and the crumpled one, and flapped her wings strongly. She searched upwards as if there was some target in the blue. Then, with not the least hesitation, she sped skyward at a steep angle, a hundred metres high above us, and circled - a complete circle half a kilometre wide.

There was no faltering as she headed off unerringly towards the east. She was free.


I'll tell you the other freedom story tomorrow, and connect the two. But to do that, I need to go backwards in time another thirty years.
home | WHAT'S NEW! | stories from my past
pt 1 <<you are here | pt 2
Posted by Denis Wright at 9:22 AM