home | WHAT'S NEW! | stories from my past
The world is badly in need of 'good news' stories. Sadly, they rarely make the headlines. Stories like this, though, sometimes do get their own moment in the sun.

Let me go back a little. It would have been right at the end of 2009, I think. It was one of those rare occasions that I was listening to a cricket test match being broadcast on ABC Radio. Rare, i.e., in the sense that I would usually be watching such a match on TV rather than have the radio on instead.

This was only days after I'd been operated on for a highly malignant glioblastoma multiforme brain tumour. The ABC was running a competition about interesting local cricketing stories, when this one came up.

You can (and should!) read it more fully and better described here, but the gist of it as I heard it on the radio was this. The brother of a young cricketer called Glenn McGowran had told the story of how Glenn, battling a malignant brain tumour of a different type to mine still played his cricket, even when he was having seizures. 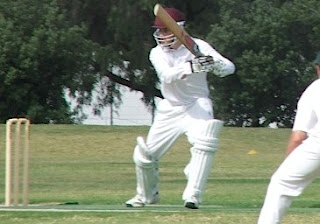 If he felt a seizure coming on while batting, the best sporting traditions of this game would cut in. The match would just stop for a few minutes, and then he'd come back out and resume his innings. Given the effects of a focal seizure, it takes guts, and sporting friend and foe alike respected that, as he expected no favours when the game resumed. When he was fielding, he just continued playing if a seizure was hanging around.

In précis form like this, it doesn't seem as great as it is, but it was truly inspirational. Not surprisingly, it won the story competition. It wouldn't have mattered if it hadn't. The story was the thing that counted. It's told better than I can in other stories here and here.

If anything happens by chance, then chance dictated that I would meet up with his brother Paul, the one who'd sent his story to the ABC. It wasn't a physical meeting, but a brief Twitter exchange only a few weeks ago. It established that instantaneous bond between people who share a life-and-death family experience.

That's not quite the centrepiece of my story. Malignant brain tumours are relentless bastards - there are few other words for them, and they've been called worse. By me as well as other people. The problem rarely goes away altogether. Glenn's been battling this since 2006. There are periods of imminent danger and those of remission.

The highest grades of tumours can't be eradicated entirely, as a rule. They are a Sword of Damocles that hangs over the lives of those who have them, and just as importantly, over their close families.

Sometimes I think the pain of those close to a person with a very serious medical problem is placed on the periphery, but it's also at the centre of their lives as well. It's especially poignant when the person is young: a child or young mother or father, or one where their children really need them and where their greatest wish is to see their children safely into adulthood.

Glenn's going to be a daddy in a few months. Imagine if you will the stress that he and his family felt when the next brain scan (MRI) was due a few weeks ago. Seeing what's below, it would be impossible not to appreciate and share the joy with them all of knowing that a good period of grace is ahead, and perhaps one allowing enough time to access the medication that will deal with the tumour once and for all. 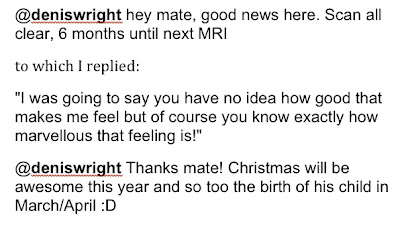 You need more words than that? I don't see why. That symbol at the end, if you don't know, stands for a wide smile. :D

(NOTE: The photos have been shamelessly plundered from the newspaper articles I've referenced above. I thank them.)
home | WHAT'S NEW! | stories from my past
Posted by Denis Wright at 1:01 PM