In praise of cow dung 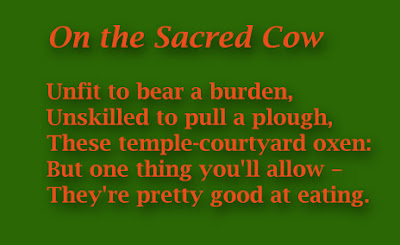 So goes a little poem from ancient Indian Sanskrit literature from the 3rd Century CE.
It gently mocks the role of the cow in Hindu religious tradition. And yet, the Indians also know that it fulfills functions in Hindu society that often aren't given a thought in the west.
'Scrawny old bag of bones,' said one of the tour party. 'The best thing would be if someone shot the lot of them. They're useless and cause a lot of trouble. Everyone would be better off.'
Would they now?
Take the obvious things for a traditional village. They provide milk - or some of them do. A family that owns a cow has a little food or income while the cow's lactating. They produce a calf every year for a while and that's worth money. In the end there's a whole industry around their death, not the least of which concerns leather and everything derived from it. 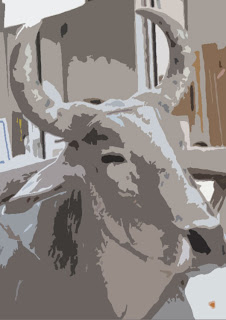 But they're not always productive in this way. For one thing, half of village cattle born are male. They can, it's true, be beasts of burden and pull ploughs, but what of the 'temple-courtyard' oxen that don't do any work? They take every opportunity to thieve produce where they can - food that humans eat. They don't work for their living.
Or so it seems. Yet, no matter how old they are, what gender, how inconvenient they can be getting in the way of traffic and people, they produce one wonderful product that's enormously beneficial.
Dung. There ought to be hymns in Sanskrit in praise of cow dung. Perhaps there are.
It's untrue that cows constantly compete with humans for food, unless the humans are plain careless and leave the garden gate open. Of course, the cow will take what it can get in that case, but that doesn't happen too often. The fruit and vegetables are too valuable a resource for that to be allowed.
The truth is that cows do a great job eating what humans won't - grass, grain stubble, banana and mango skins, paper, corn husks, vegetable peelings, half rotten or spoiled fruit. As to grass, there's no need for motor mowers or wasted labour on such matters.
All of this produces considerable quantities of dung. People have funny ideas about it. It's just vegetable matter that's gone through quite a complicated processing. It doesn't smell bad. And its uses are manifold.
It can be used as garden fertiliser, of course, but in India it probably won't get put on the garden till it's been used for other things.
There are castes that deal with cow dung. Their job is to collect it fresh and bring it to their area of the village. There it is patted by hand into regular sized cakes of uniform consistency, and sun-dried. They make a living selling these disc-like cowpats. It's not a great living, but the raw materials are always available and the market is assured.
In this form, the dung cakes have many uses. They are crushed and mixed with other things to make a daub plaster for the walls of small houses or shanties.
In the dry season, the floors of the village houses become dusty. Cow dung cakes are crumbled and sprinkled on the earthen floor. This lays the dust and provides a thin clean soft cushion for the feet. It doesn't smell and is virtually sterile.
After some time, it can be scraped up, together with the dusty soil underneath it, and put on the garden as compost. A thin layer of fine dirt covered by a dry dung layer makes a new throwaway carpet.
But there's one other use for the dung cakes that makes them very valuable - as fuel. Wood is scarce and kerosene very expensive. Fires running on either need careful tending.
But a fire burning cow dung yields a slow, steady, uniform heat that is perfect for cooking curries. Women can leave them burning and go out to work. The dung cakes have the qualities of a good cigar; they keep on going for hours and need little maintenance. The smoke from a well-set fire is little but can help to keep unwanted insects like mosquitoes away.
In fact, soap is made from high quality cowdung is highly prized.
So, cow dung is integral to traditional village life, both socially and economically. This means that the 'useless' cow's demise would create a real cost in many different ways. Sadly, it is more and more scorned with the rapid modernisation India is undergoing, but India has always been an evolutionary society rather than revolutionary, so it could take quite a while. Village life is slow to change, which can be both a boon and a bane.
Sometimes we forget that 'useless' things can have a vital role in maintaining fragile balances that make the difference for many between a tolerable life and severe hardship.
home | WHAT'S NEW! | stories from my past
Posted by Denis Wright at 10:08 AM