home | WHAT'S NEW! | stories from my past
Some of our friends were surprised when I told them the the autumn colours were beginning to show.
'Already? Isn't it early?'
It may seem so, yet I've noticed in many seasons we can see the first signs as early as January that the European trees are going to colour. The sap stops rising and, amazingly, each tree commits a form of suicide by denying itself the essentials for growth, or even preservation. 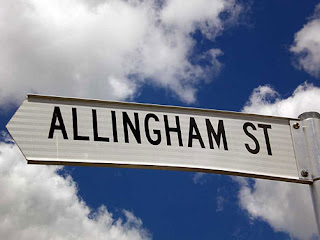 Come with us on our walk a week or so ago, pictures taken over just two days. We'll show you the sights, and maybe a few oddities. Tracey did the camerawork - beautifully - seeing things that I often don't, especially as I need my eyes on the path a few metres ahead.
Maybe we can surprise you with a slideshow.

You can never be quite sure of what's on the pathway ahead till you get there.
I'm not sure why trees of the same species change at different times, but I guess it has to do with location and water and nutrient availability.

These pistaceas are in full summer regalia. 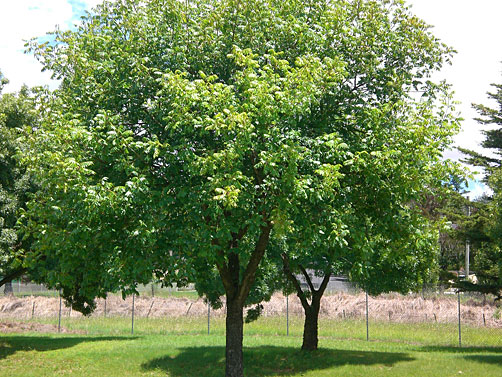 The native trees don't change for the winter. 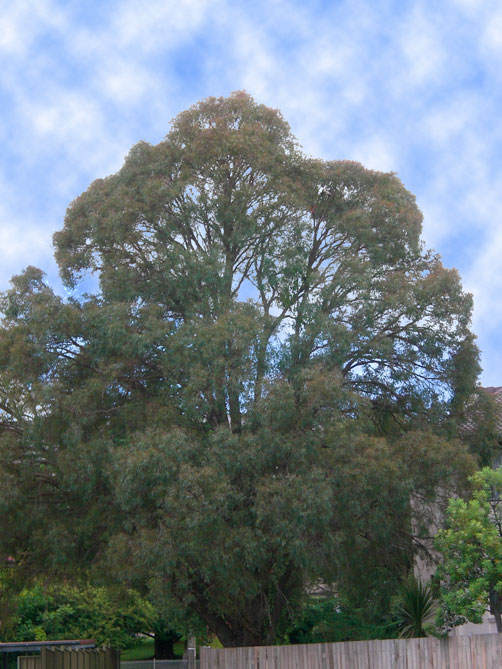 Here's the mix: various gums. I know for sure the one on the left is a stringybark. 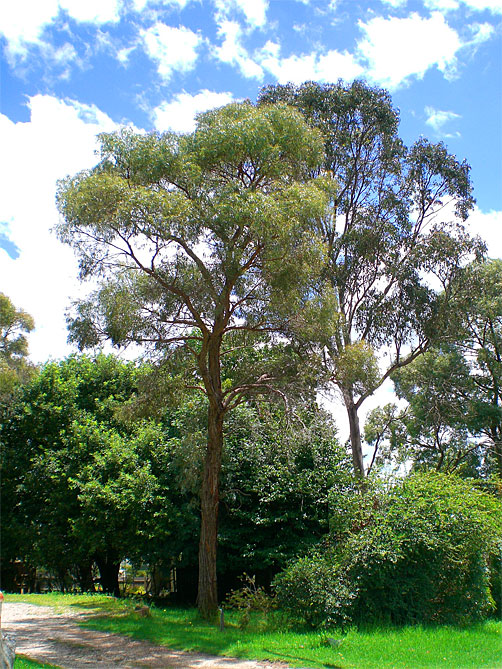 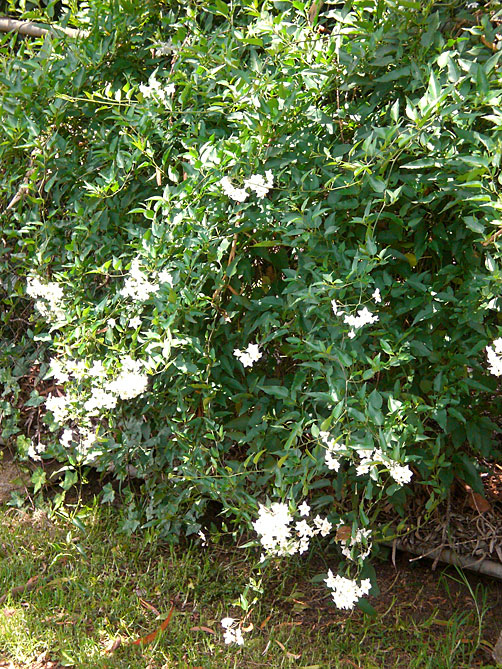 The first signs of autumn start to show.... 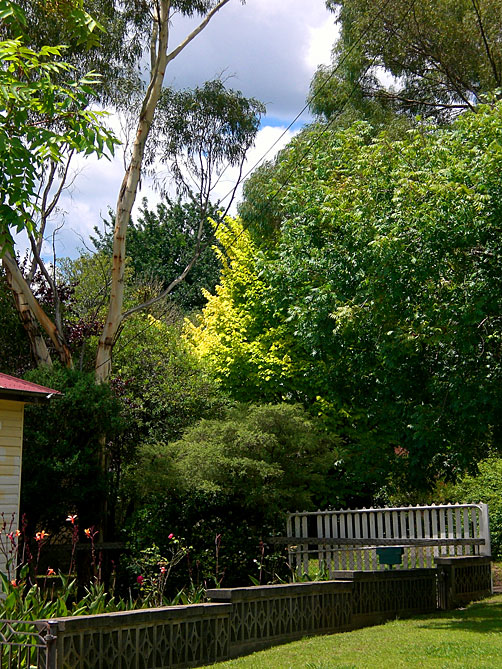 More yellows against the green. 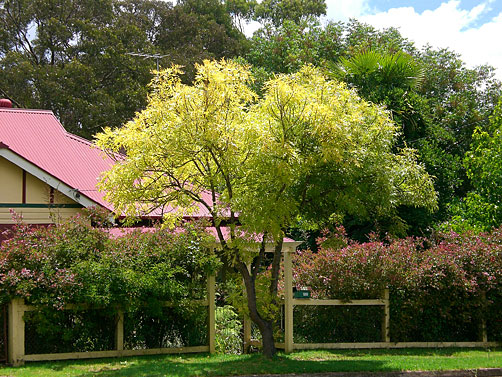 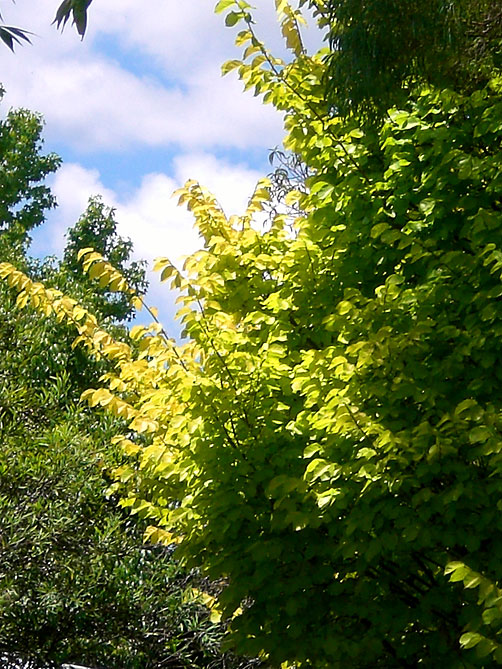 Sometimes it's nicer that the grass in the laneway isn't cut. 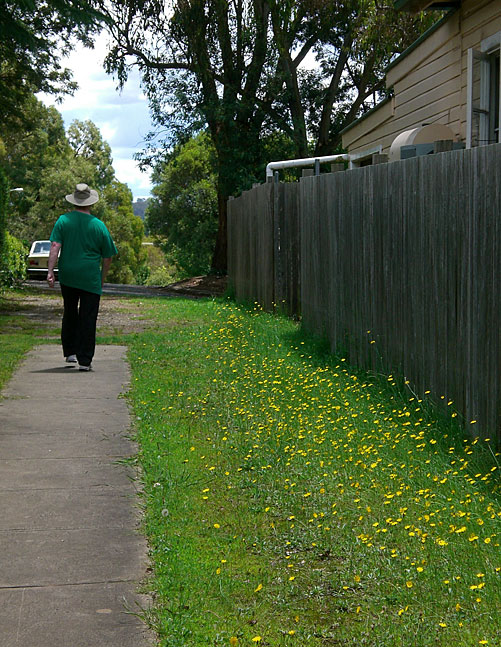 The little golden ashes in the centre start to colour. 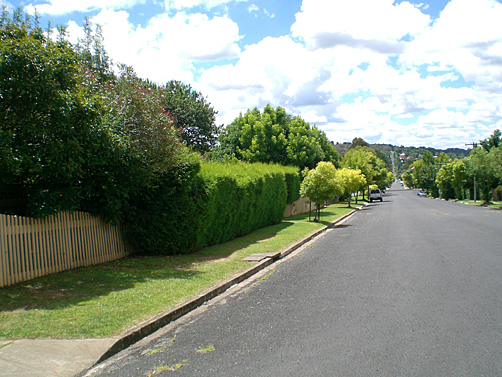 Some pistaceas go a bright yellow. 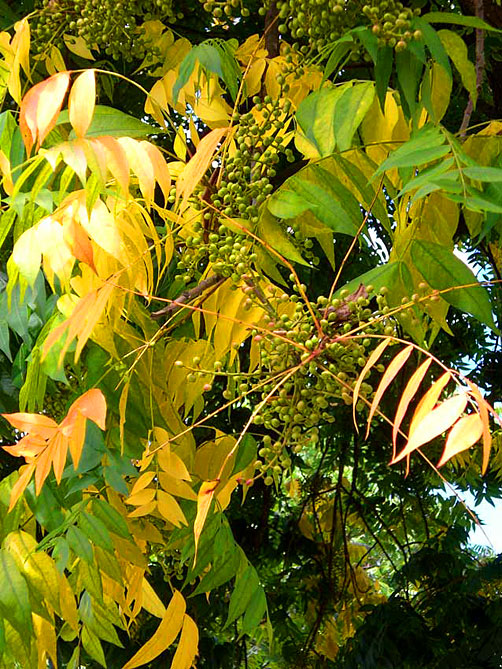 And the mix is on. Some are turning red beside the giant gums.... 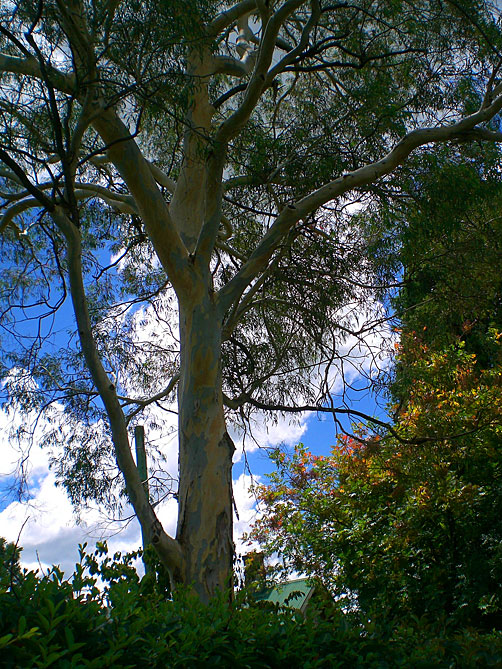 Some seem keen to put on a salmon-red display. 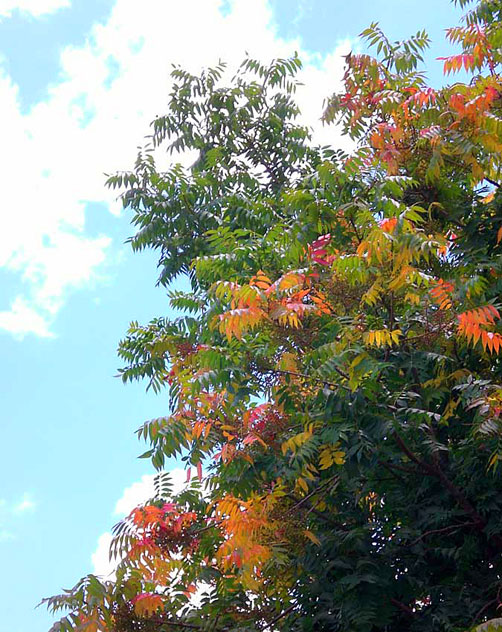 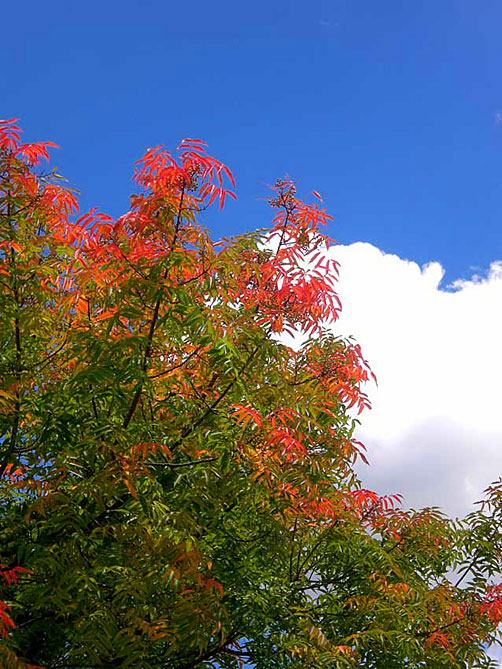 A brilliant burnt-salmon display against the green ivy. 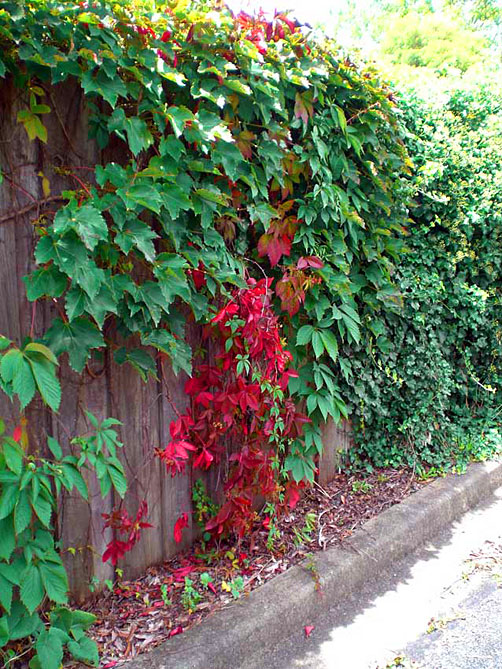 These are the paths that make it easy for me to walk; very level, with no lurking dangers. 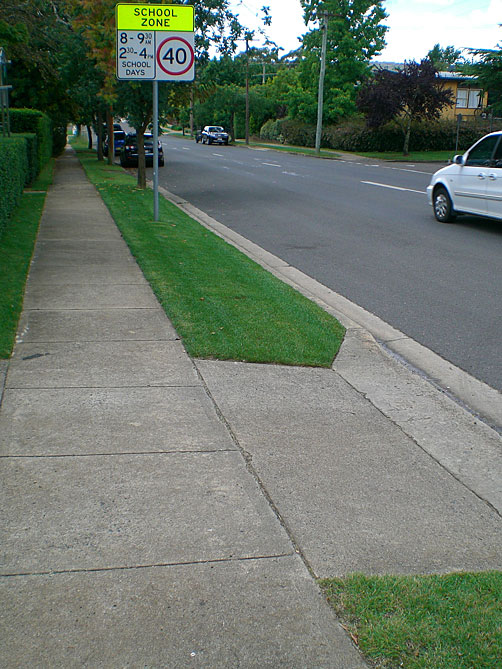 ...whereas, this is the opposite. The council paints a warning where the pistacea roots have pushed the concrete up. But I have to be ever watchful. 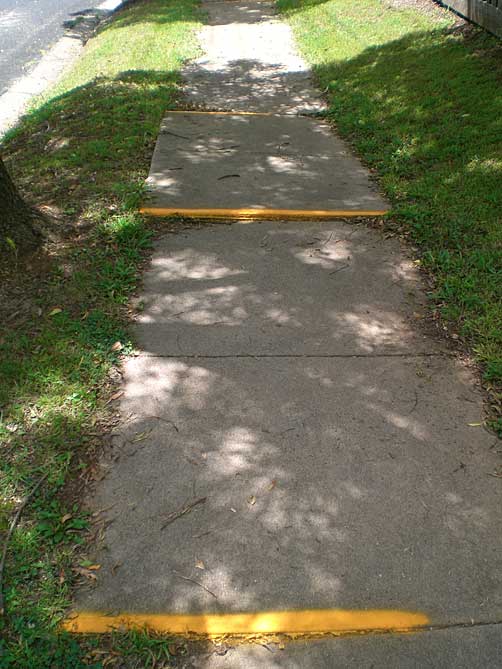 And now, a few snaps in passing. A letterbox, with its warning for all those who read French about the fearsome guardian animeaux! 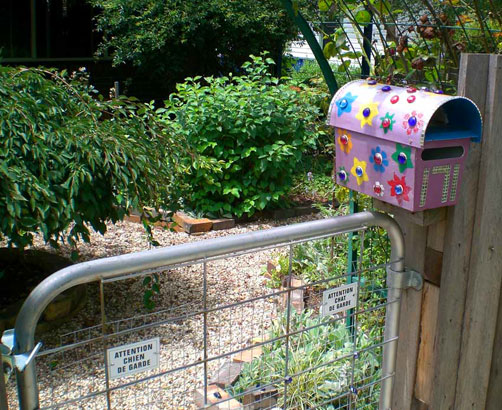 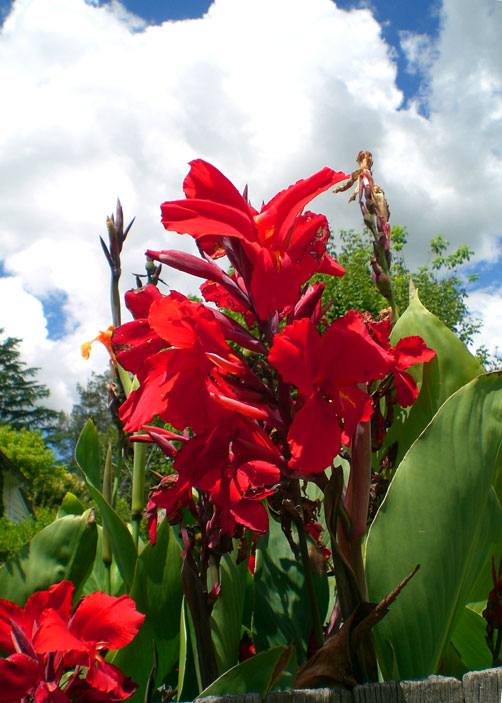 But what's in the dying petals at the top? I see images. A closer look is below. 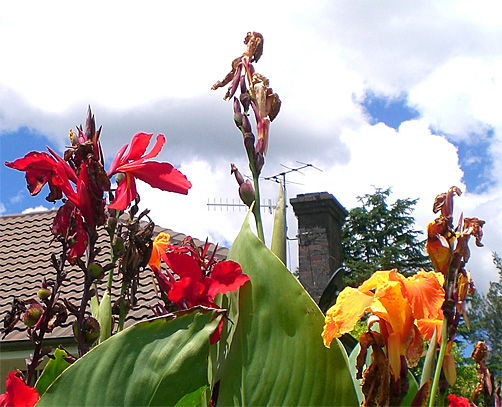 Is there a pregnant lady, arms drawn back, facing right - towards a dragon? Or is another lady, arms forward, face skyward to the left, with a Tinkerbell dress? Or is that a knight, on the right, on his rearing charger? (I have a vivid imagination, obviously.) 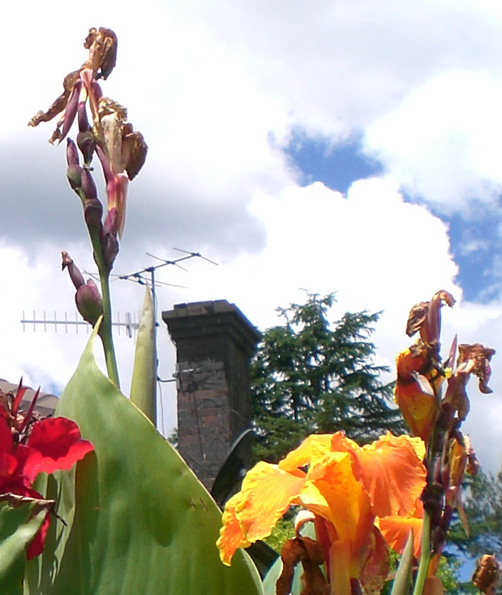 Now something a little different below, but colourful. As Tracey says, not many people have a red letterbox in their garden! 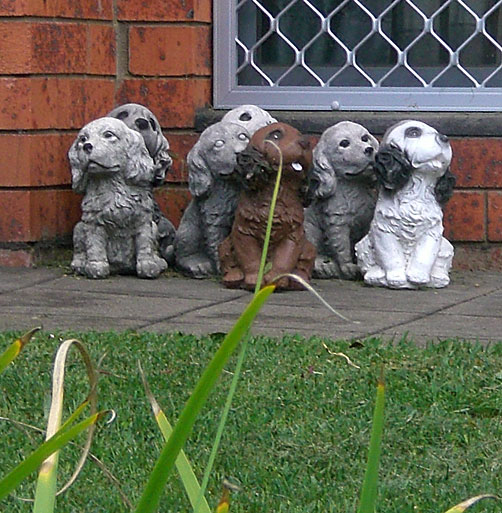 Just roses, against the wall and the green ivy. Roses are blooming everywhere right now, and the ivy will turn scarlet before long. 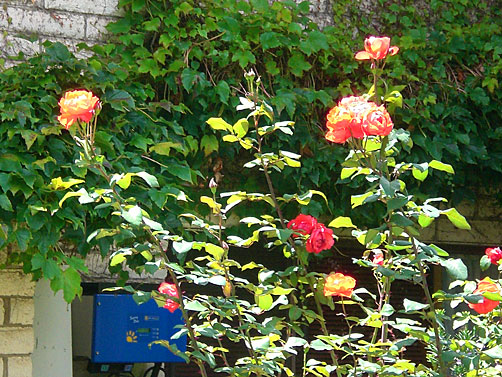 The Armoured Personnel Carrier at the barracks just down the road from our place. We're safe! 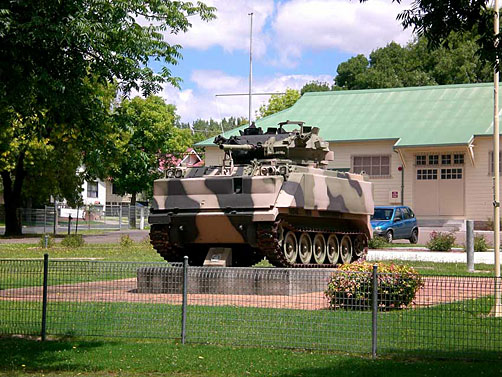 Just a big beautiful gum. I'm not sure of the type. Blue gum? 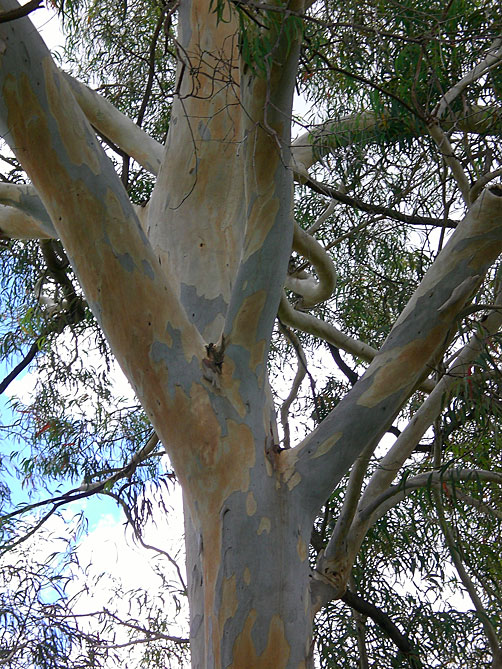 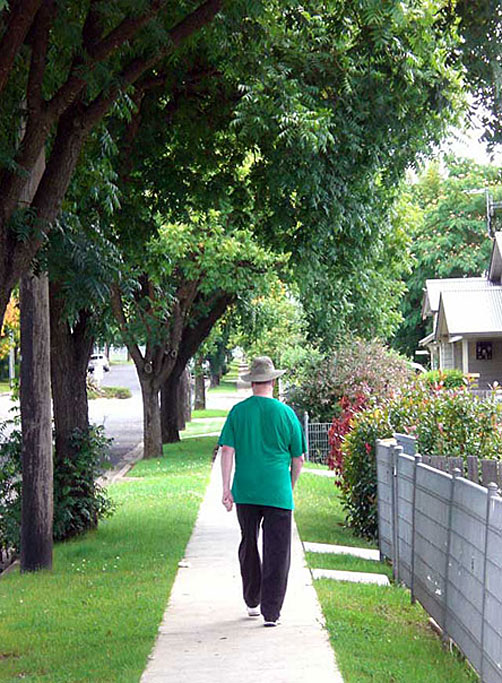