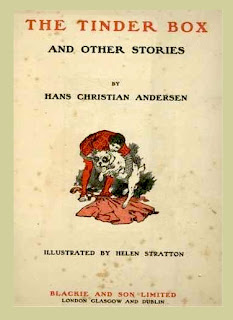 There is a story in Hans Andersen's Fairy Tales that I particularly remember. You may know it if you were brought up on with these tales, as we were. It's called The Tinder Box. I'm betting the older you are, the more chance there is that you've read it.

Perhaps it was the illustration in our edition as children that first took my fancy. It featured a gnarled dead hollow tree, a soldier and a hump-backed old woman, no doubt referred to then as a crone; the sort who was a likely candidate for classification as a witch in medieval times. Women like her were burnt at the stake watched with morbid fascination by a public eager for entertainment, and probably a great deal of glee by a neighbour of high public profile with an eye to acquiring her property.

Just to be sure, I found the story and re-read it. Until I did that, I didn't realise how much of the story had settled in the dark recesses of my memory. But it's there. As I've discovered, I have lost nothing I have ever learned; I just fail sometimes to recall it.

The story comes back to me as I read it; every word, every phrase, every mental image. If only it were so easy to drag back to the forefront of memory! That's the tricky bit.

The only part I do remember well is relevant here. A soldier is asked by this old woman, who in the story I see now is indeed called a witch, to go down into the hollow tree where there is wealth below. He agrees, and finds a room as full of copper coins as is Scrooge McDuck's money bin with cash.

Happy at this, he fills his knapsack with as many as it can hold, but then decides to visit the next room. He finds it full of silver coins, so empties out the coppers and refills the knapsack with silver. He decides to risk going into the third room (as each room is guarded by a fierce dog), and you will be astounded to learn, no doubt, that it is full of gold and jewels. Once more he gives the contents of his knapsack the flick, and stuffs it with the choicest of the riches in the third room.

The story really heats up after this, with gory things happening, as they do in these sorts of fairy tales, and has a happy ending of course, as they also do, except for the victims of various murders and executions; but what I've described already contains the moral of my tale below.

If you've been following my posts to any extent you will probably become aware that I've developed something of an addiction to gutenberg.org  Daily I've gone through what's been released each 24 hours, and found some wonderful things in the oddest of volumes.

I wanted to share some of them with you, so I read those that appealed to me (sometimes purely on instinct). I took some trouble to extract a tiny bit from each, together with illustrations where there were any, and started building a collection.

What happened was that I carefully edited these, and planned to release them at intervals, but I am like the soldier with his knapsack. The more I read, the more I feel the need to throw away some of the older excerpts stacked away in my knapsack of curiosities.

Where I differ from the soldier is that I am reluctant to throw any of my riches away, even the copper coins as it were - but I will have to.

It's impossible to know what will appeal to you most, but I'll keep the excerpts very short. I wasn't harsh enough in my editing with the one on snuff, but I think I've learned my lesson, and what will come should entertain you, especially with pictures!

One is coming up shortly, if I can hold the grey matter in my skull together for long enough. Very shortly....
home | WHAT'S NEW! | stories from my past
books1 | books2
Posted by Denis Wright at 11:58 AM