Where the wild things ought to be (2) 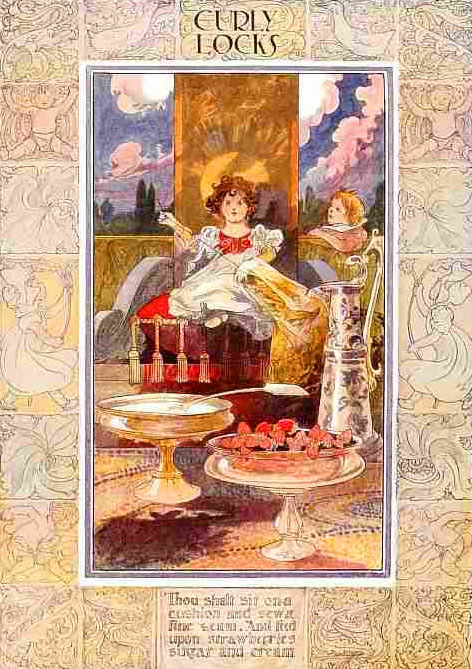 I was reading a book of nursery rhymes the other day, as you do.

The reason is that I wondered how many I remembered from my childhood of the large collection in front of me, and was well pleased that I knew the majority of them. I don't mean 90%; but more than half. There are some there that are gems I've never seen before.

Still, it's a goodly number, considering how many rhymes are there. 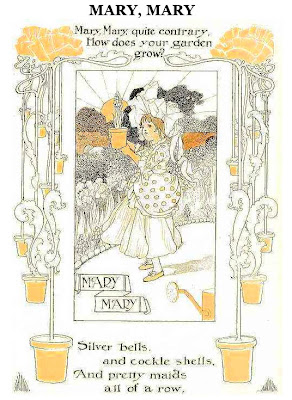 Then I asked myself exactly why I knew so many. Most of them derive from the nineteenth century or a good deal earlier – Tudor times at the latest, as we know from some of the references to the Black Death, and Mary Queen of Scots, Humpty Dumpty etc.

I won't go into how so many are veiled references to important political figures of their era, parodied, lampooned and derided, as these analyses have all been done before.

But reading them now I can see how many also poked fun at social figures, men and women, with plenty of sexual overtones that would escape children completely – though not their parents, particularly at the time of the rhyme's invention, I'll bet. 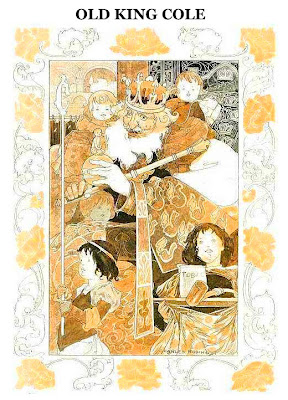 The reasons why there are so many stuck in my head vary. One is that our house was full of books of one sort or another, suitable to our ages as we grew up.

Mum knew well, instinctively, the enormous worth of verse and song, rhythm and rhyme, and how valuable they were to our neural development.

Thus she read and sang them to us and we sang them with her while looking at the pictures. Links and associations developed in our brains and cemented memories there. The alphabet was learned with no effort. Pre-TV Sesame Street in our own accent, some nursery rhymes were.

All sorts of children's games also played their part, linked as they were to verse and rhythm. Some in the 1950s which we thought utterly harmless would be very incorrect politically these days. My sisters will readily remember one clapping game that starts: 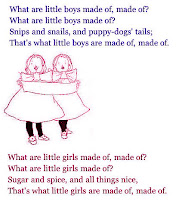 Mary Mack,
Dressed in black
Silver buttons down her back
She likes coffee
She likes tea --
(And supply the final line, girls!)

Or the rhyme to choose something:

A lot of these games were girls' games, but in a small country town there was a good deal of cross play. I had three sisters and many girl cousins, and in the spare time in the weekend, boys and girls would often play the same games, whether rounders or skipping. When numbers were short and you needed a backstop in rounders, it didn't pay to be too choosy.

All the girls had their personal skipping ropes, but the best fun in skipping was communal.

We boys were a bit funny about this, as it was pretty much a girl's art, but sometimes a strange fancy took us all and we'd decide to play as well.

The girls didn't mind. Society was still strongly gendered; the Swinging Sixties were yet to arrive. This was one thing they surely proved publicly that they did better than the boys. They were happy to demonstrate it and remind males of their inferiority in these quite physical pursuits.

Some girls were expert at turning the long heavy ropes in perfect time. We learned to run 'in' without stopping the rope, and skip in time, along with five or six or more others. As with all things, there was an art to this and the skill didn't always come easily.

As well, the girls sometimes got two ropes and the turners interwove them, turning one clockwise with one hand and anticlockwise with the other - a bit like an egg-beater only different....

That action doubled the pace and the skill required. Even to 'run in' without stopping either rope was quite a challenge and required split-second timing and coordination.

I wonder if they do this at schools these days, anywhere, or if the 'double-rope' skipping is a thing of the past? I hope not. Maybe it still exists in country schools, or is more widespread than I think. It's the sort of thing multicultural schools in the cities just might have reimported with the arrival of some new culture group.

I'm guessing. It was so good for kids in so many ways. No wonder we were lean and healthy. Or plump and healthy.

Just healthy, yes. Many a somewhat plump little girl could skip all day.

The point of all this is that songs were always sung to go with the skipping game, whichever one was chosen, and quite a few of them were based on the old nursery rhymes too, so it's hardly surprising that we never forgot them.

Now this brings me to the surprise package in the Big Book of Nursery Rhymes. Or is it really so surprising, or outrageous?

I refer to the slut! I contend, Yer Onner, that it's much less outrageous than we might think.

Next time, final part. I promise. Scout's honour. Hey, here it is! 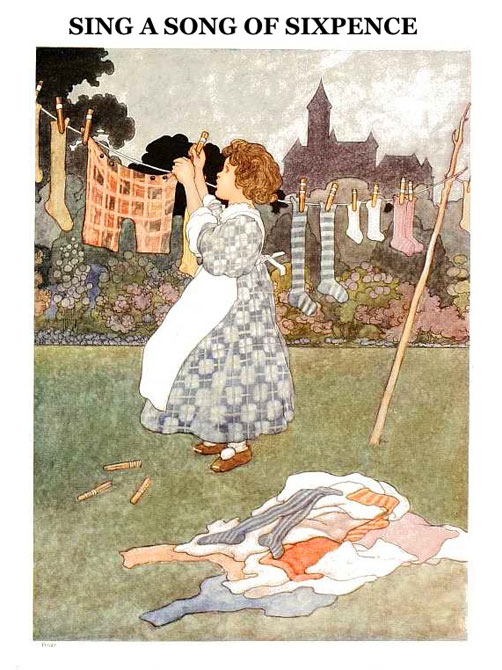 All images come from the online version of The Big Book of Nursery Rhymes, available at http://www.gutenberg.org/ebooks/38562

There are various formats, but I recommend highly installing a Kindle Reader program on your PC or Mac computer (you don't need to own a Kindle Reader tablet) and enjoy the beautiful illustrations as well.