The business end of the dairy layout was the milking shed itself, where six cows could be accommodated at one time; three double bails. This meant that a person worked between two cows in each pair of bails, and three people could work at the same time.

We'd start by putting a cow in three of the six bails. As there was usually only Dad and I in the dairy to start with, we'd take a bail on each end as our own, and either of us would work the middle bail when we had things under control in our own bail. That way, two could do the work of three and cut the milking time down a lot, but there wasn't much time to spare!

Believe it or not, there were actually left-hooved and right-hooved cows, by which I mean they had a preference for which side bail, left or right, that they were milked in. The older cows were aware that they needed to have the back leg closest to us in a back position, in order to expose the udder. So a cow who went into a left-side bail would need to have her back right foot back, and vice versa for a cow in the right-side bail. (Got it?)

We deliberately trained our cows to do this automatically they came into the bail. If they didn't, a gentle push on their hip bone would make them adjust their balance and put the correct leg back.

On some farms, cows were leg-roped if they were prone to kicking the milker or otherwise playing-up. This meant tying the leg back that was nearest the milker.  We rarely needed to do this as our cows were generally well behaved. 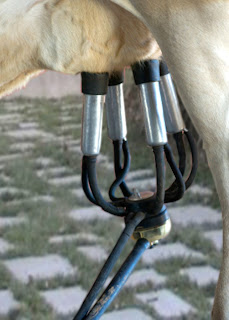 Why were the cows so cooperative? One sure-fire reason: they were always fed when they came into the bail. A four-gallon drum cut open and nailed to the front end of the bails for each of the six spots contained something to eat. As long as the food end of the cow was preoccupied with stuffing her face, she didn't care too much what was happening at the other end.

That was the secret, and it paid large dividends.

Usually they each got a large prune-tin full of chaff with half a prune-tin of pollard on top. How much they got depended on how good or bad the season was. In drought time it might be the only feed they got in a day, so were give more than in good times when there was plenty of grass around. No food for the cattle meant no milk, so we fed them well. There was extra urgency by the cows in lean times to get into the bail.

Hence each waited at the gate with some degree of impatience for her turn in the bail, and had no hesitation in coming in. The matriarchs expected to be first and were most indignant if some lesser beast were called before them.

The cow's udder was washed with a mild detergent. In cold weather we added hot water to the washing bucket, both for our comfort and for the cows'. We'd put the cupset of the milking machine on to each of their four teats and the 'cups' would stay in place via suction - the same suction that would pump the milk up the flexible rubber pipes to the static steel pipes above all our heads.

Milk would flow through these pipes to a large vat inside the processing area of the dairy.

Well into the ten or so minutes it would take for the milking machines to do their job for the first three cows, we'd let others into the other three bails, and prepare them for milking in the same way. All six units would now be full. Then we'd switch the machines over to them, and start the process of 'stripping' by hand, milking the last litre or so from the cows who had just been milked by the machines.

This added a lot to the effort on our part, but if you added up all the stripped milk, it was significant. Machines just couldn't extract that last bit, and a cow left with milk in her udder might produce less next time.

Usually, that was just enough time to complete the job on each before the cow had eaten her quota of chaff and pollard. She'd be let out, and the food replaced for the next cow.

Sometimes in a hurry, we might forget to put the food into the drum before the next cow was let in to the bail. She would be very cranky about that and toss her head until the victuals arrived. With apologies.

And so it went on. When Mum came up after doing things in the house, she'd bring tea in a thermos flask, and something to eat. Dad would have his first, after working solidly for three hours or so by then with nothing in his stomach. Mum took over his job milking while that happened, and then I would take my turn to get a cup of tea and a bite to eat too. You can't imagine how good that tasted.

Towards the end of the milking, the shock-cooler would be turned on. Here's where the third job of the diesel engine came in. As I said before, the engine had been cranked up and running the moment Dad got to the dairy, not much after 4.30 am.

The reason for this was that it ran the compressor for the large farm fridge housing the milk from the previous afternoon's session. The engine needed to be on for much longer than the actual milking time just for this job alone, to keep the fridge temperature down far enough.

So the diesel ran the fridge, the milking machines as well, and the shock-cooler, which had its own compressor. The milk that came from the cows was of course quite warm, even after the time it poured into the vat through a filter. The water in the pipes of the shock-cooler was just above freezing point.

The warm milk flowed by gravity over the series of chilled pipes from the vat via a tap. By the time it got to the tray at the bottom it was thoroughly chilled. From there it was filtered again before filling milk cans one by one, and each can of ice-cold milk went into the fridge.

The shock-cooler was worth its weight in gold. As kids, we would fill a cup with fresh, ice-cold milk, and to us, nothing tasted better in the world. Warm milk didn't appeal, but full-cream jersey milk, so fresh and sweet and chilled, tasted nothing like what's in a milk carton these days.

Nothing, I swear. Scout's honour. Cross my heart and hope to die!