home | WHAT'S NEW! | stories from my past
This morning, as he is wont now and again to do, the good Dr Watson sent me a photograph taken somewhere on their selection.

Occasionally he sends me an image of a painting he has done, or as in this case, one of Maureen's photographs. There's never been one of either the paintings or the photos that I haven't admired.

I find this a very pleasing image. Black cockatoos must be just about the largest birds in Australia you might see flying across the sky in sizable numbers. Often as they fly, they make a very evocative call, somewhat mournful but interspersed with wanton shrieks.  They seem mostly to be in pairs these days, rather than the larger groups that were common to see years ago.

I don't want to get into the sort of description you can readily find online, or even bewail the loss of its breeding places and my fears for this spectacular bird's future. But as kids we used to hear them winging their way at deceptively high speed across the sky above our heads, and we would count them.

'That's four! It's going to rain in four days then,' we'd claim. This makes as much sense as what we'd say when the kookaburras burst into song at some odd time of the day.

'Somebody nearby is going to have a baby!' Snigger snigger, as only kids can do with anything involving reproduction.

Anyway, it's a beautiful picture. They look cheeky, as well they might, for they've just been ripping the banksia flowers apart. Maybe they flew over a Pink Floyd concert yesterday; they've got that tearaway look about them.

Each of the pair is scanning its half of the surroundings, for anything that might be a threat.

At this point, I should say that I now know something I didn't when I wrote the above. I was still waiting on a response from Maureen to my belated request to publish the image, and after my sleep this afternoon, I got the green light. Bruce tells me that there was a dozen of them, but by the time Maureen got her camera and into position, there were only two left in the tree. I'm delighted about the numbers, but in a way, just the two were perfect for this shot. 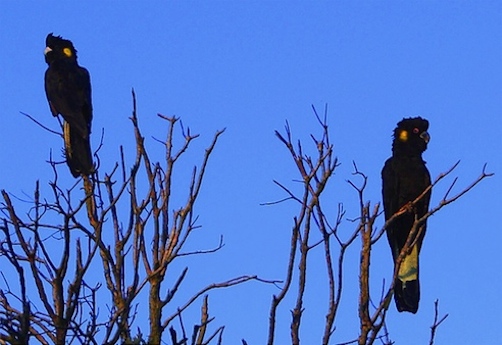 And notice the blue of the Ardea sky on a late spring morning up here on the Tablelands.

That perfect blue sky. Something to want forever. But nothing is forever in the world of time and material things. Carpe Diem.


Hang on! You want to see a little watercolour by Watto, the illustrator of many of my childhood stories? OK.... but the small size doesn't quite do it justice. This is an afterthought by me and I haven't waited on his permission. He'll just have to forgive me for taking the liberty in this instance. It reflects perfectly the bucolic existence they lead at what they have made of Ardea.
home | WHAT'S NEW! | stories from my past
Posted by Denis Wright at 6:07 PM